Brooks Running Shoes – Get Ahead in The Race

In such a competitive market  dominated by giant footwear brands like Nike, Adidas or Asics, Brooks running shoes have made a distinctive mark with their one of a kind technology. Last year, 2014, was the 100th anniversary of Brooks Sports, Inc. The company started in 1914 making bathing shoes, then slowly transitioning to sports shoes around the 1930s. By the late 1970s onwards, Brooks athletic shoes were being worn and endorsed by world champions. Today, Brooks running shoes are well known around the world and recognized as a force to have in running events because of the highly developed and patented technologies incorporated into every Brooks product.

Brooks has been known for launching innovative technologies that can be found in their running shoes. It is the very reason why the shoes made by this company have been so successful on the market, despite being such a small brand compared with its competitors.

EVA and Podular Technologies– Ethylene- vinyl Acetate (EVA) was introduced by Brooks in their sports shoes in 1975. It is used in making the midsoles to improve durability. Today, EVA is standard use in midsoles throughout the athletic shoe industry. In 1995, the Pod tech was introduced as the new Brooks midsole/outsole technology. It improves balance, flexibility, and excellent forefoot design.

Hydroflow and DNA – All Brooks shoes were equipped with Hydroflow, which is a cushioning technology, when it was introduced in 1989. It has since been replaced with better technology, DNA and about half of all Brook shoes have the new technology. The difference between the two cushioning applications is Hydroflow is silicone fluid trapped into a plastic shell and moves from an inner chamber to an outer chamber when impacted. The DNA is a full length cushioning system which is supplementary to EVA and is the reason why Brooks is not considered better than other running shoes like ASICS.

e-Fusion, MoGo, Green Silence – Three of the more recent technologies introduced in Brooks running shoes are e-Fusion is heel tech designed to improve absorption; MoGo is a midsole design that enhances cushioning and comfort being a full-length application; and Green Silence is the environmentally-friendly running shoe made with recycled materials and soy-based inks. 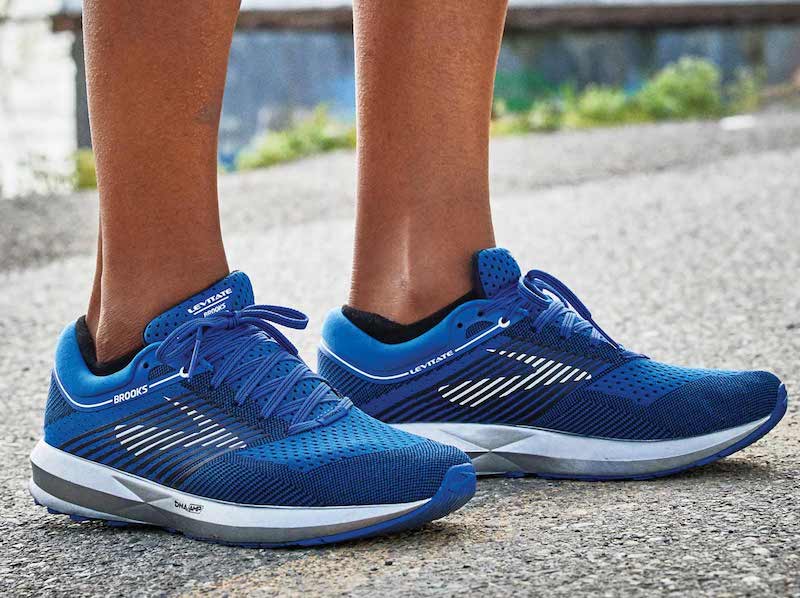 Other innovations found in Brooks shoes are the customized 3D Fit Print, 3D Hex Lugs, and the Ballistic Rock Shield, among others.

As proof of the outstanding performance of Brooks running shoes over the years are the numerous awards the company has received for its products. Among them is the over-pronation friendly Five Star Runner’s World Award in 1977, recognition as having the best motion control running shoe in the Brooks Beast running shoes, the Seal of Acceptance from the American Podiatric Medical Association, Gold Medal for Best Renovation and Best Update from Runner’s World with the Adrenaline GTS, and 3 time industry recognition for eco-friendly technology and stewardship.

Their recent line of running shoes has surpassed expectations of even the most critic al of runners. The Brooks Pure Line, Adrenaline, Beast, and Ghost shoes are remarkably comfortable as are the Ravenna, Launch, PureGrit, and Glycerin. You can read some detailed reviews for these Brooks styles at the runningshoesguru.com. The women’s line of running shoes is also extremely well-received because it addresses many of the concerns of female runners such as weight and comfort.

According to popular running coach, Jack Daniels, the weight of your running shoes is significant because for every 100 grams, a runner has to spend 1 % aerobic energy so less weight means more energy to get to that finish line! Brooks running shoes have this characteristic of being lightweight without loosing their support an cushioning capabilities.

FacebookTwitterRedditLinkedInWhatsAppTumblrPinterest
By Marc Andrews|2022-10-30T01:11:52-05:00March 8th, 2015|Featured, Running Shoes|Comments Off on Brooks Running Shoes – Get Ahead in The Race