One of the most popular classics of all times, the All Star Chuck Taylor has been revamped in the recent years resulting in some memorable Converse special edition shoes. No discussion about iconic sneakers, specifically basketball shoes, is complete without mentioning Chuck Taylors. The ubiquitous influence of the Converse brand has not only seen it becoming one of the top selling sport footwear of all time, it has also resulted in the Chuck Taylor brand transcending different cultures and lifestyles around the world. Converse not only has been partnering with household names to come up with special editions but also supported communities and causes, the Converse LGBT collection released yearly being just one example.

To top it off, their simplicity and versatility has sparked an unending love affair, which has seen many companies and individuals adding their own spin to it. Here’s some of the top Converse Chuck Taylor Special Editions.

‘A match made in heaven’ could easily be used to describe The Simpsons Converse Chuck Taylor Special Edition line. Both are globally recognized and enjoyed by people from different walks of life. Additionally, Converse All Stars are the oldest basketball shoes while The Simpsons is the longest running scripted TV show in history; not to mention the fact that both have racked up a number of firsts during their lifetime.

The Simpsons Chuck Taylors, which were launched in mid-2013, are fun and colorful with lively prints featuring the main characters: Bart, Homer, Lisa, Marge and Maggie. Following up the success the initial collection had, in 2014 more styles were released featuring the beloved characters. All in all , the variations of the Simpsons Converse collection include men sneakers that feature Homer; children and adult Bart sneakers; and Family sneakers which feature the entire Simpson family. Sold out everywhere, you can still find them on eBay.

In 2014 Converse came up with a quite daring "Food Pack" collection that has taken their printed editions at another level. While it may not seemed practical to mix food and footwear, this collection  accomplished the feat with little effort. The Converse Food Pack included 3  high-tops and one low-top silhouette, dishing out an eye-catching spread that could give you hunger pangs.

Highly graphic uppers see the shoes being decked out in two famous fast food entrees, the cheeseburger and pizza pepperoni, along with two desserts in the form of a cupcake and a donut. As you can imagine, they are mouthwatering. These are indeed a rare Converse Special edition shoes collection that is hard to find. 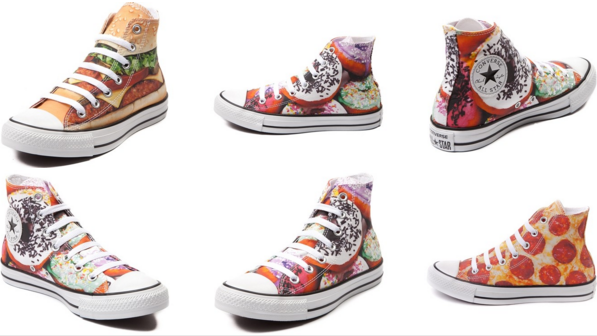 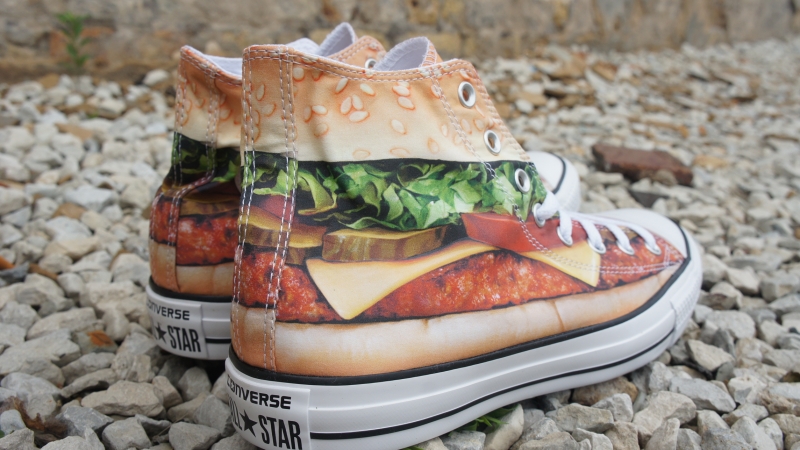 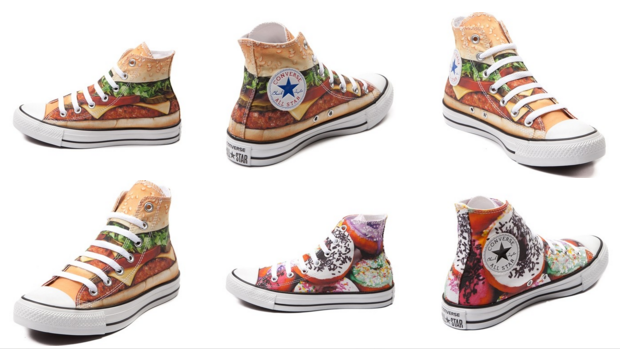 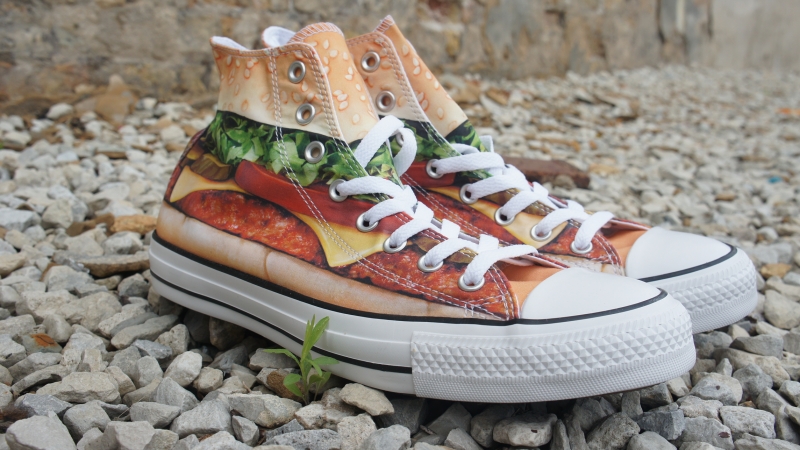 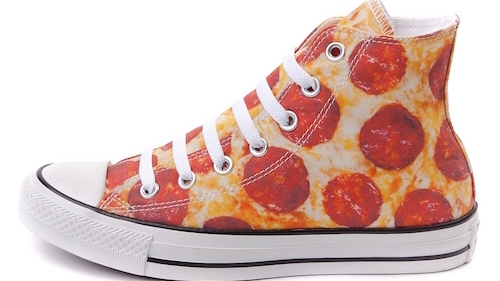 When you pair the most beloved sneaker with some of the most loved comic book characters, sparks are bound to fly. The DC Comics Converse Chuck Taylor Special Edition is definitely one of the most action-packed and fun lines, with all the comic legends most adults have grown up with and which many kids are currently enjoying. From superheroes, Batman, Superman and Wonder Woman, to super villains such as Joker and Riddler, there is a character for everyone.

The Converse DC Comics is one of the most prolific collaborations of the brand, with the first editions released in 2011 and with new styles introduced every year.  Available in both high-top and low-top classic Chuck Taylors, these sneakers are stunningly attractive with eye-catching graphics. What’s more, on  Converse.com you have the option to custom design your own shoe, using your favorite character(s) and colors.

Andy Warhol is regarded as one of the greatest artists of the 20th century, with distinct, original style. Back in the 60's he was one of the first to customize his own  Chuck Taylors. In 2016, Converse and the Andy Warhol Foundation paired up to honor the artist , with a portion of the revenue generated by the shoe collection to be donated to charity.

The designs of the sneakers, which was available in both high and low tops, feature signature art pieces done by Warhol during his lifetime, with the Campbell’s soup can being one of the favorites. The second part of the collection included some of his most famous artworks such as Lady Liberty, The Velvet Underground Banana and a Self Portrait. Especially for art lovers, this collection was a real treat. You can still find these on eBay.

Love of country and flag is boldly represented in Converse Flags Chuck Taylor Special Edition sneakers. Converse is one of the oldest US shoemakers and they are proud to show their heritage. Especially before the 4th of July Holiday the brand issues new versions of their flag series. Along the US flag sneakers Converse makes the Union Jack Flag ones, a huge hit not only in Europe but across the world. So whether you’re from the United States or United Kingdom, these kicks can help you show off national pride in the appropriate red, blue and white combo.

With various variations of the flags in both low and high top Chuck Taylor All Stars, the line proves that these emblems are anything but boring. Check them out on eBay.

In 2011 Converse Japan and Nintendo paired up to celebrate the 25th anniversary of the renowned Super Mario Bros game making for another Converse special edition shoes collection. That summer four styles of this limited special edition were introduced, all displaying Super Mario in patterns and screenshots of the popular game. The collection was promoted by mita sneakers as well as other retailers in Japan. While very rare , you can still find them on eBay.

Rock music is one of the most loved art forms and the Rock Band Converse Special Edition shoes perfectly represent the link between fashion and music. Capturing the essence of the genre, it is possible that these editions of the cult classic sneaker could give you a valuable history lesson in rock music as the collaborations highlight some of the finest practitioners of rock and the fact that many of them loved Chuck Taylors. They include:

In 2008 Converse started their partnership with the English rock band Black Sabbath to release a special edition of Chuck Taylors featuring artwork inspired by ‘The Masters of Reality’ , ‘We Sold Our Soul for Rock N’ Roll’ album covers. In 2009 Ozzy Osbourne had his own sneaker released. The collection was a huge success and 6 years later a new collection was released, this time with artwork from Black Sabbath self titled album, "Never Say Die" ,"Paranoid", "Vol 4" as well as a memorable live stage artwork. Sold out everywhere, you can still find them on eBay.

In the fall of 2010 Converse celebrated Green Day's new trilogy Green Day ¡Uno!, Green Day ¡Dos!, and Green Day ¡Tré!  with 3 custom styles, inspired from the members of the band and the album covers. In the spring of 2013 the shoemaker released 4 more styles with artwork inspired from albums such as "American Idiot", "Dookie" and "Kerplunk"

In 2009 Converse released  a stunningly graphical Chuck Taylor Special Edition line which preserves the youthfulness of AC/DC, a rock band that blew up in the 70s and has remained an icon. The collection featured 4 printed styles including the band portrait from the cover of the 1979 Highway to Hell, the latest album with the Bon Scott being the front man. Another memorable sneaker is the one with Angus Young's portrait printed on red canvas having on the midsole in bold lettering the "Lock Up Your Daughters" lyric from the TNT song hit.