Just this past week-end we came across a pair of adidas Stan Smith in white and green, making it a great time to review its features. As it was announced in 2015, the adidas Stan Smith has officially became the best selling shoe of the brand, surpassing the iconic Superstar that held this honor for over two decades. With over 40 millions pairs sold since 1965, the adidas Stan Smith is also one of the best selling sneakers of all time. It's safe to say that the big push in 2014 played a big role in this latest development, when it was reintroduced after a 2 year drought. A large array of celebrities have joined the campaign that revamped this style, one loved both by men and women alike. Along with the OG colorway in white and green several special editions have been introduced, many selling out shortly after.

The adidas Stan Smith story has started in 1965, about a year after the brand decided to create its first tennis shoe. The original name of the shoe was adidas Robert Haillet, a well-known french tennis player at that time. In 1971, when he retired from tennis, adidas has decided to change its name after Stan Smith, the american tennis player who was holding the number one position in the world. Many believe that signing Stan Smith was an essential move of the german brand made to make its presence on the American continent a more influential one.Ironically, Stan Smith played for most of his first years in tennis with the original shoes. After a several years in which the shoes displayed the names of both players, in 1978 Robert Haillet's name was removed. As with many athletic shoes from that era, the adidas Stan Smith has slowly became an everyday shoe, one that only became more popular with the passing of time. 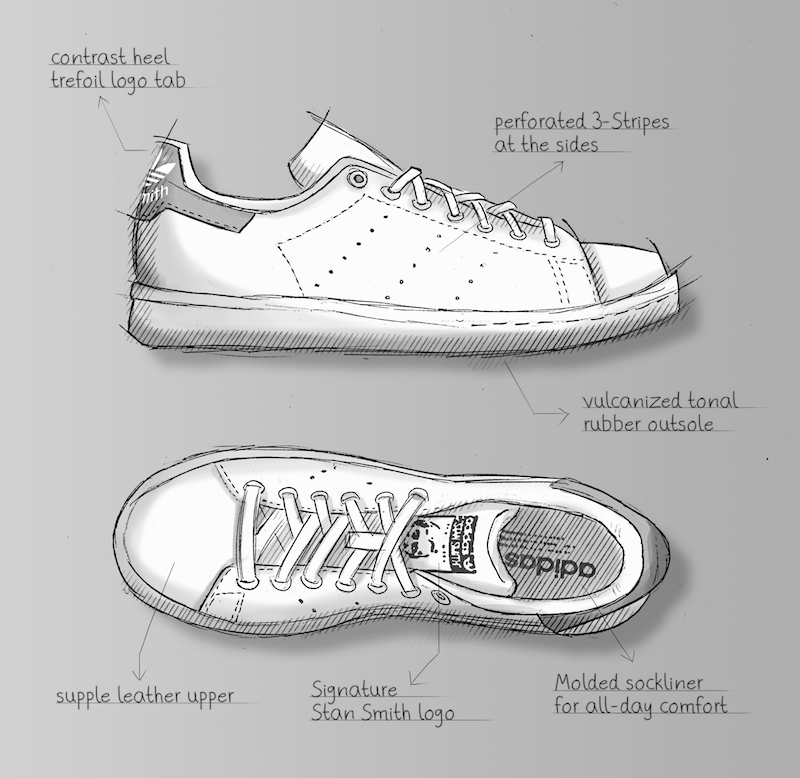 The adidas Stan Smith has a sleek, simple deign that have won the hearts of men and women all over the world, being easy to wear with any casual attire. The classic white and green version has a clean look and any special edition tend to follow the same pattern. The overall construction of the shoe remained basically the same over the decades.

The overall design of the shoe is a simple one, with the main characteristic being the absence of the traditional three stripes on the sides, replaced by perforations. It is quite ironic that the most popular adidas shoe is missing its signature feature, yet it's probably what made it more appealing to more people, giving it casual shoe look more than an athletic one. The tongue has the Stan Smith portrait, one that started to be used on the shoes in early 80's and it's still being used today. The adidas trefoil logo appears once again in the heel area while the toebox gives it the toe down look. Traditionally the upper has been made of smooth full grain leather, with recent versions featuring suede, nubuck or canvas.

The sole is made of tonal rubber with cushioned inner sole. As you'd expect from a shoe from the 70's, the support is minimal, with EVA in the midsole. We can say that the comfort these shoes provide comes from the slim upper and minimal sole that makes it a fairly lightweight shoe.

The adidas Stan Smith is the type of shoe you can't go wrong with. Stylish, simple, with a clean look, it's the casual sneaker that it will match any attire.