I was lucky to get a great deal on a pair of Nike Flyknit Racer running shoes in volt and black, making it a good time to review its features. The Nike Flyknit Racer was among the first in the line of innovative Flyknit athletic shoes launched by the brand back in early 2012. It was released around the same time as the Nike Lunar Flyknit Trainer, although gaining more of the spotlight after being widely released during that year’s summer Olympic Games as a lean, classic cut sneaker designed for marathon running.

With all the talk about the revolutionary Flyknit technology, which is said to be the result of four years of research, I decided to try out a pair of Racers from one of the sellers that had a sale going on. I settled for the volt green version that was first released in the summer of 2016. The first impression I had of the Nike Flyknit Racer was that it really gave a sock-like fit. It's worth noting that these are among the few unisex running shoes from Nike. I noticed many people were saying to buy one size bigger for a perfect fit and that’s what I did, which has worked out pretty well so far. The fit is really snug due to its narrow width, but has been a model of performance both on the road and in the gym. It does have that level of quality and prestige which I have come to expect from Nike products over the years. 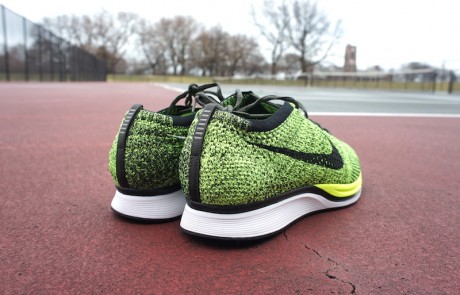 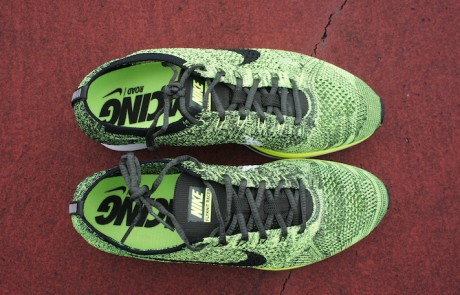 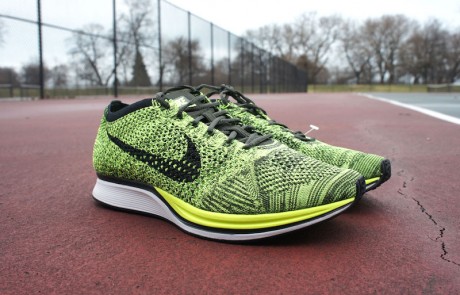 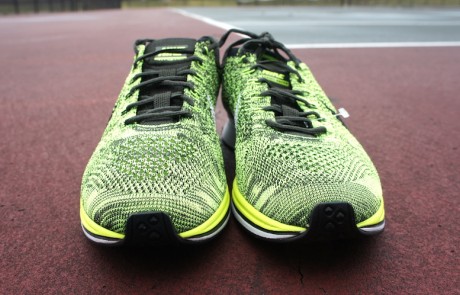 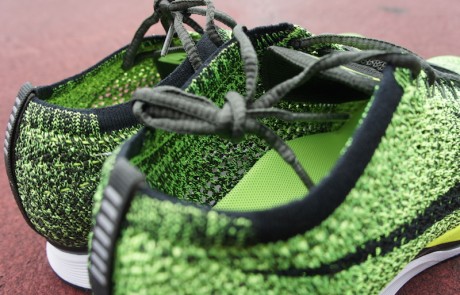 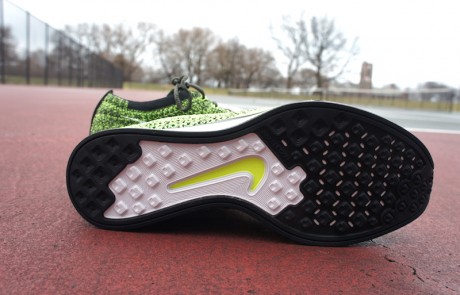 Described as a lightweight shoe that adapts to the foot’s natural form, the Nike Flyknit Racer has an upper that seems to fit like a second skin. Its minimalist structure consists of a single layer of Flyknit fabric that wraps the feet and offers great breathability, which is useful on those hot days. Note that you can literally see through the fabric, so you probably should leave it at home if you plan to go outside on a rainy day.

The knitted fabric is reinforced in areas where most pressure is exerted by the foot, whether while running, jumping, or just walking. In addition, it really makes you feel like you are wearing nothing sometimes. After all, the entire upper weighs in at around 6 ounces due to the absence of any extra padding, making it one of the most lightweight running shoes on the market. What I noticed during this Nike Flyknit Racer review I noticed that when running in these for about 5 miles they felt great, being super breathable and offered great support. They were clearly built for speed. With their stylish look these make some cool every day shoes and we added them into the rotation just like many others did. There is a reason why Nike did not change a thing to this shoe for five years and they still come up with new pairs periodically.

The Nike Flyknit Racer is perched on a sturdy Waffle rubber outsole that features a diamond pattern, which is geared towards performance racing. I experienced excellent traction on both rough and smooth surfaces and it seems to be quite durable. I noticed very little wear after taking it for a few miles both on and off road. The outsole backs up a cushiony midsole that includes a Zoom Air unit for the forefoot and full-lenght Phylon for a responsive feel. It felt great in the gym on tiled floor surfaces as it gripped well and helped me maintain balance while doing stretches and other routines. Also, I had no issues breaking in the shoe as I often had with other sneakers as it felt natural from the first time slipping it on.

While it is definitely built for runners, as evidenced by its name, the Nike Flyknit Racer is a great casual shoe as well. In addition to exercising, I also dressed it up with jeans and t-shirt and it fit in quite nicely, even turning a few heads. However, despite its great features, there are a few drawbacks, two of which I have already hinted at. It does fit a bit too narrow, which hasn’t been a problem for me because I read other reviews and bought a size bigger. Also, as I mentioned, it is not ideal for rainy weather. Finally, while the shoe itself has been quite durable, I have noticed some fading close to the Swoosh on the side, which isn’t really a problem, but may take away from its aesthetics a little later down the road.

To conclude this Nike Flyknit Racer review this is is a great running shoe, whether you wear it casually for its unique style or go racing in it. There are plenty colorways to enjoy, plus the brand has been dropping new ones with the shoe turning five years old recently. While still a good value, the $150 price tag can be a turn-off but many times you can find some colorways on sale, you can check your luck at the links shown below.