Vans x Peanuts shoes and apparel collection are being released this week, making up for yet another remarkable summer collaboration for the footwear brand. Just in the past few years we’ve had Vans special editions featuring Disney, Nintendo, Toy Story and Star Wars characters. Just as it happened with Disney, the Vans collaboration with the Chuck Shultz’s Peanuts gang dates from early 80’s, when the footwear maker created shoes for the crew at the Snoopy Camp in Knott’s Berry Farm. These skate shoes featuring patterns with Peanut, Lucy, Sally, or Charlie Brown were exclusively sold at this amusement Park in Southern California. In 2014 Vans Vault resurrected four of these original prints, in a collection featuring two SK8 and two Authentic shoes. Lastly, in May of 2017 California boutique Blends partnered with Vans to celebrate 67 years of Peanuts and Co. by releasing a luxury SK8 Hi Reissue in black and white. The leather sneaker depicted Snoopy lying on a line of Bones resembling Vans traditional side stripe. It turns out that the May release was just a tease of what was about to come just weeks later. 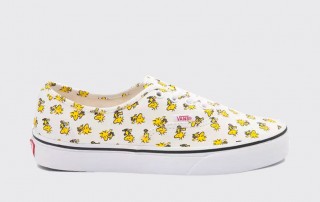 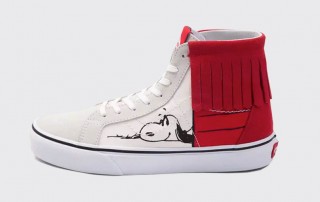 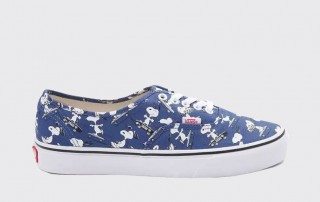 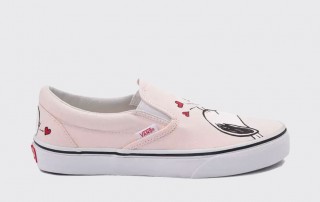 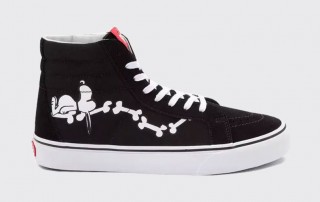 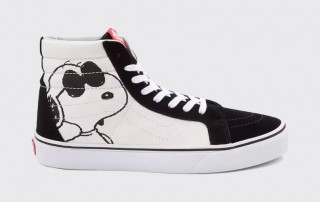 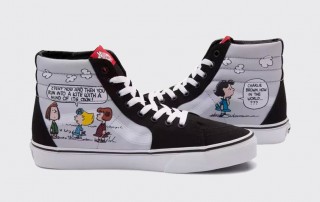 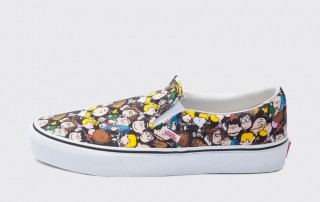 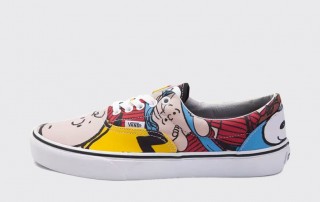 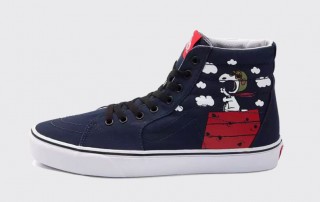 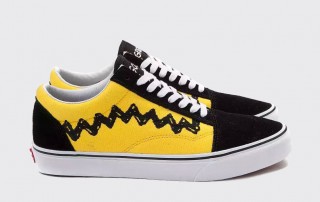 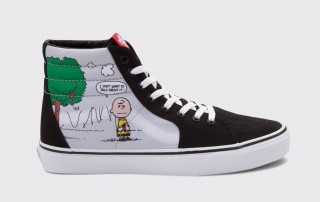 The 2017 Vans x Peanuts shoes and apparel collection released in June is one of most complex collaboration so far released by the brand. Aside of the usual array of customized sneakers the collection features t-shirts, hoodies, jackets, caps, socks, backpacks, dresses, sunglasses, wallets and leggings, all featuring Peanuts Gang imprints. The star of the collection seems to be the Vans SK8 Peanuts Snoopy Bones that is a canvas version of the Blends collab sneaker mentioned above. In fact, Snoopy is stealing the show; he is being featured on the Vans Slip On Peanuts and Lucy shoe, the Vans Authentic Peanuts Snoopy and Woodstock as well as on the two other SK8 Joe Cool and Mock Doghouse. Charlie Brown gets on a pair of black and yellow Old Skool sneakers as well as on the Charlie Kite snake shoe. The whole gang gets depicted on a pair of Vans Era as well as on a pair of Vans Authentic.

All in all, the 2017 Vans x Peanuts shoes and apparel collection is remarkable in many ways. For the first time for such a collection, Vans is offering several styles that fans can customize with their favorite colors and characters. From the design details to the large array of apparel options, it’s safe to say that anyone can dress up from top to bottom to celebrate one of the most iconic cartoon characters of the past decades. The Vans x Peanuts shoes and apparel collection official release date is June 2017 and is available at the retailers shown below. Prices range from$12 for a backpack key chain to $90 for a pair of Vans SK8 Hi Moc Peanuts Dog House shoe, the most expensive piece of the collection. Men, women, toddler and kids versions of various pieces of the collection are available for purchase.